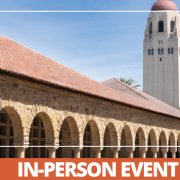 Penetrating the fog of the coverup surrounding the murder of Stanford University's cofounder, historian Richard White deftly sifts through the evidence and reconstructs the full story. In 1885 Jane Stanford and her husband, Leland Stanford, co-founded Stanford University in memory of their deceased son. After Leland's death in 1893, Jane steered the university and its policies into eccentricity and controversy for more than a decade. When she died in 1905, her vast fortune was still the university’s lifeline.

To foreclose challenges to her bequests, Stanford's president and his allies insisted it was death by natural causes. But it was a murder, by strychnine poisoning, and the culprit walked. Against a backdrop of San Francisco’s machine politics, corrupt policing, tong wars, and heated newspaper rivalries, White’s search for the murderer will draw you into Stanford’s imperious household and the tumultuous politics at the university. And he reveals that, although several suspects had both motive and opportunity, only one had the means.

A Humanities Member-led Forum program. Forums at the Club are organized and run by volunteer programmers who are members of The Commonwealth Club, and they cover a diverse range of topics. Learn more about our Forums.

In Conversation With George Hammond