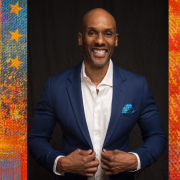 Keith Boykin: The Politics of a Darkening America

Go To Past Event
from Keith Boykin: The Politics of a Darkening America held on June 7, 2022

After the events that took place over the course of 2020, America remains more divided than ever. When faced with a global health crisis and widespread cries for racial justice, leadership crumbled and the Republican Party suffered defeat in the 2020 election. According to Keith Boykin, Republican leaders have responded with inciting white Americans in a last-ditch race against time to stop the rise of a new majority.

Keith Boykin, CNN political commentator and New York Times best-selling author, has been at the center of this broader conversation of race and politics for three decades. He has seen America fail time and time again from its negligence in making a long-overdue reckoning with a shameful history of racialized violence.

His new book Race Against Time: The Politics of a Darkening America discusses what he says is the dwindling white majority's resentment toward the emerging multiracial tide; this animosity toward change and social progress has created a political stalemate initiated by the GOP. He argues that now is the time to make substantial steps toward justice not just by making Black lives matter but by making Black lives equal.

Join Keith Boykin in a conversation about race, politics and the fight for equality.

In Conversation with Brian Watt