High inflation, rising interest rates, sweeping tech layoffs, a crypto meltdown. The recent economic news has been less than encouraging, leading the International Monetary Fund to warn of “storm clouds” descending on the global economy. At the same time, GDP in the United States grew to more than $20 trillion in 2022. The Bay Area, largely thanks to tech, had the fastest growing economy in the United States, with GDP increasing 4.8 percent. The United States is at or near full employment. What does it all mean for workers, investors, and Americans’ pocketbooks? What impact are the Fed’s actions having?

Michael Boskin of Stanford’s Hoover Institution, former chair of the President’s Council of Economic Advisors, will share his insights into the U.S. economy, productivity, the evolution of work and impact of tech, and whether we will tip into a recession. UC Berkeley’s Maurice Obstfeld, former chief economist at the IMF, will assess the ongoing impact of the war in Ukraine, China’s COVID woes, and other trends shaping the global economy.

This event is underwritten by Bank of America.

Media sponsors for this featured program:

Economist and Dean of the Haas School of Business, University of California, Berkeley. 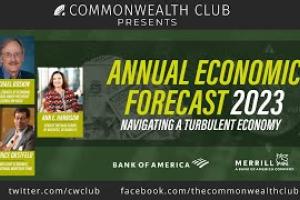