The killings of George Floyd and Breonna Taylor and the mass protests that followed opened many Americans’ eyes to cases of police brutality and misconduct. But two decades earlier, a civil rights lawsuit against Oakland police brought some of the same issues into focus. The suit alleged that a band of rogue veteran police officers known as "The Riders" beat, kidnapped and planted drugs on Oakland residents. A 2003 settlement led to federal monitoring of the Oakland Police Department, which continues to this day.

In their new book The Riders Come Out at Night, journalists Ali Winston and Darwin BondGraham explore the history of policing in Oakland, the fallout from the trial, and why some promised reforms have failed.

Join us to hear about their reporting and what it reveals about policing in the Bay Area and the United States.

Independent Reporter; Co-author, The Riders Come Out at Night

Reporter; Co-author, The Riders Come Out at Night 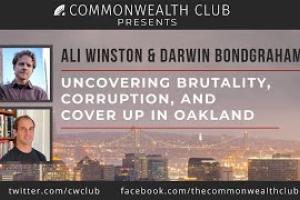