Maggie Haberman: Politics, Donald Trump and the Breaking of America

Who is Donald Trump? In her highly anticipated new book, Confidence Man: The Making of Donald Trump and the Breaking of America, the Pulitzer Prize-winning New York Times reporter Maggie Haberman chronicles his life from his rise in New York City to the White House.

Join us as Haberman discusses what she learned during interviews with hundreds of sources as well as numerous interviews over the years with Donald Trump himself, a man she says is both a complicated and often contradictory historical figure who pushed American democracy to the brink.

This is an important political event you won’t want to miss.

In Conversation with Tim Miller

Writer-at-large, The Bulwark; Author, Why We Did It: A Travelogue from the Republican Road to Hell; Twitter @timodc 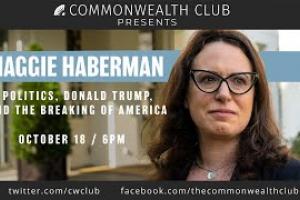 Maggie Haberman: Politics, Donald Trump, and the Breaking of America