Erwin Chemerinsky: The Changing Role of the U.S. Supreme Court

With the recent appointments of Neil Gorsuch, Brett Kavanaugh and Amy Coney Barrett, the balance on the U.S. Supreme Court has shifted fundamentally toward the conservatives, and a series of precedent-breaking decisions issued during the 2022 session confirms it. The implications of the Dodd decision alone are far reaching for individual rights, not to mention those cases that focus on the government’s ability to regulate policy in areas like immigration, the environment, the separation of church and state, and gun safety. In many respects, the court majority's ideological shift to an originalist approach to constitutional interpretation has upset the balance of power and redrawn the traditional lines separating the three branches of government in our democracy.

As the court opens its fall session, Dean Chemerinsky will discuss the new justices and these recent decisions as well as upcoming cases before the court  which address critical issues like affirmative action and the independence of state legislatures. He will shed light on how the changing role of the Supreme Court might affect the future of our democracy.

He will also discuss Chemerinsky’s new book, Worse than Nothing:  The Dangerous Fallacy of Originalism.

This program is part of an ongoing series on the Future of Democracy. 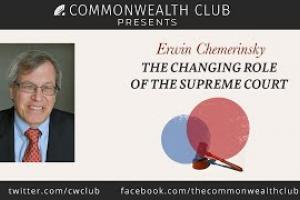 Erwin Chemerinsky: The Changing Role of the US Supreme Court