Adam Hochschild returns to The Commonwealth Club with his revelatory new account of a pivotal but neglected period in American history: World War I and its stormy aftermath, when bloodshed and repression on the home front nearly doomed American democracy.

The nation was on the brink. Angry mobs burned Black churches to the ground and chased down pacifists and immigrants. Well over a thousand men and women were jailed solely for what they had written or said, even in private. An astonishing 250,000 people joined a nationwide vigilante group—sponsored by the Department of Justice.

This was America during and after the Great War: a brief but appalling era blighted by torture, censorship, and killings. Hochschild brings to life this troubled period, which stretched from 1917 to 1921, through the interwoven tales of some well-known characters, like the sphinxlike Woodrow Wilson and the ambitious young bureaucrat J. Edgar Hoover, and of other less-familiar characters, like the fiery antiwar advocate Kate Richards O’Hare and the outspoken Leo Wendell, a labor radical who was frequently arrested and wholly trusted by his comrades—but who was in fact Hoover’s star undercover agent.

A groundbreaking work of narrative history, American Midnight recalls these horrifying yet inspiring four years, when some brave Americans strove to keep their fractured country democratic, while ruthless others stimulated toxic currents of racism, nativism, red-baiting and contempt for the rule of law—poisons that all feel ominously familiar today.

A Humanities Member-led Forum program. Forums at the Club are organized and run by volunteer programmers who are members of The Commonwealth Club, and they cover a diverse range of topics. Learn more about our Forums.

Hochschild photo courtesy the author; background of main image is detail from cover of American Midnight.

In Conversation with George Hammond 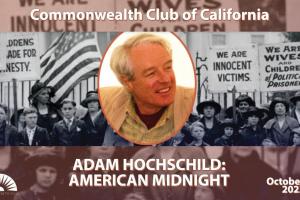