Star Chef Matt Horn: On West Coast Barbecue and the Future of Hospitality

Chef Matt Horn has quickly become one of the most noted chefs in the Bay Area and, increasingly, the country.

Since opening his namesake restaurant, Horn Barbecue, in West Oakland in late 2020  the California native has been named a Food and Wine Best New Chef in 2021, won a coveted spot in the Michelin food guide, had his unique "California-style" barbeque featured in major newspapers around the country, and currently is a finalist for a James Beard Foundation award for Best New Restaurant in America, one of only two California restaurants to make this coveted cut. On top of that, Horn just opened his second restaurant (a fried chicken restaurant), with much more planned for his growing food empire.

In his new cookbook, Horn Barbecue: Recipes and Techniques from a Master of the Art of BBQ, Matt Horn tells his own inspiring story of how he learned to make BBQ and open a restaurant, and about how his journey echoes and continues the historic lineage of African American barbecue in the United States—an engaging yet often unknown history. His cookbook also has recipes and tips for those who want to try his recipes and classic "low and slow" method at home.

After the talk, guests will enjoy some of Horn's famous BBQ in a fun, post-program reception. Food included in ticket price.

Please join us for a special evening with one of the Bay Area's rising chefs.

Horn will be interviewed by Bay Area food scene veteran, Cecilia Phillips. Phillips has worked under several celebrity chefs and has served as a food tour guide for many years in San Francisco. She began her journalism career as a reporter at KIEM in Eureka, California, and upon relocating to the Bay Area joined KQED as an intern. She then moved into the role of coordinating producer and on-camera reporter for the flagship KQED broadcast show, Check, Please! Bay Area. Within the program, she produces a special series called "Cecilia Tries It," where she scours the Bay Area in search of off-the-beaten-path spots for exciting, culturally diverse culinary experiences that fans can’t miss.

This program is part of The Commonwealth Club's Good Lit series, underwritten by the Bernard Osher Foundation.

Founder & CEO, Horn Hospitality Group; Author, Horn Barbecue: Recipes and Techniques from a Master of the Art of BBQ 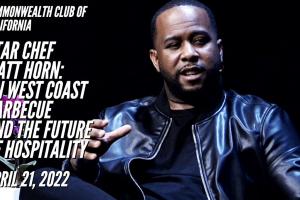 Star Chef Matt Horn: On West Coast Barbecue and The Future of Hospitality