David Wessel: How Washington Works in the New Gilded Age

When a Silicon Valley entrepreneur developed a tax break intended as a way to incentivize the rich to invest in underserved communities, the idea was pushed into law with little scrutiny or fine-tuning and few safeguards against abuse. With an unbeatable pair of high-profile sponsors and deft political marketing, the Opportunity Zone became an unnoticed part of the 2017 Trump tax bill.

In his new book Only the Rich Can Play: How Washington Works in the New Gilded Age, bestselling author David Wessel follows the money—starting from this Opportunity Zone initiative—to see who profited from the plan that was supposed to spur development of blighted areas and help people out of poverty. His findings? The Las Vegas Strip, the Portland (Oregon) Ritz-Carlton, and the Mall of America. In other words, lucrative areas where the wealthy can place their money profitably and avoid capital gains taxes.

Wessel provides vivid portraits of the proselytizers, political influencers, consultants, real estate dealmakers and individual money-seekers looking to take advantage of this opportunity. He looks at the cities in which the Opportunity Zone initiatives have failed, as well as a few where they have succeeded, and offers a lesson on how a better-designed program might have helped more left-behind places.

Join us as David Wessel, offers an in-depth analysis of the bill he faults with keeping the rich richer—revealing the gritty reality of a system tilted in favor of a few while leaving many out in the cold.

Senior Fellow and Director of the Hutchins Center on Fiscal and Monetary Policy, Brookings Institution; Author, Only the Rich Can Play: How Washington Works in the New Gilded Age; Twitter @davidmwessel

In Conversation with Lenny Mendonca 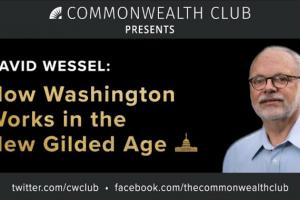 David Wessel: How Washington Works in the New Gilded Age