How to Raise Civically Engaged Children

This special family event will feature a multigenerational panel of adult civic leaders and educators talking together with their children about practices and opportunities for engaging young people in civic life.

Increasingly, youth have been speaking up about the importance of having parents and teachers who model civic engagement and encourage them to get involved in their communities. But how can we get our kids involved in ways that are both meaningful and rewarding? How can families engage in civic work together? What can kids do on their own, and how do they want adults to support them?

A lifetime of civic engagement begins in youth. We encourage you to watch this special program with your family.

This program is presented by Creating Citizens, an education initiative of The Commonwealth Club.

Amber Coleman-Mortley’s passion is focused on elevating diverse voices and perspectives in the civic education space, working with students, educators and parent communities for more equitable outcomes. She holds a B.A. in African American Studies from Oberlin College and an M.A. from American University in Media Entrepreneurship. Coleman-Mortley is a former decorated college athlete, former educator and athletic coach. She covers civics, K–12 education and family life at MomOfAllCapes and on her podcast with her daughters, "Lets K12 Better." She has been featured in the Los Angeles Times, The New York Times, The Washington Post, Smithsonian magazine, and a variety of other broadcast, podcast and online media outlets.

Suzanne Ford is a fierce  activist working toward equal rights for the trans community. She is employed as a regional sales manager at Revere Packaging, being named by Plastics News as one of the Women Breaking the Mold in the Packaging Industry in 2017. Ford serves as president of the Spahr Center in Marin County and as a board member and vice president of SF Pride. She also works on the board at Trans Heartline. Ford lives in the San Francisco Bay Area with her wife Beverly and son Daniel. She is available to speak to groups or employers about trans issues and her experience facing the world as a trans woman.

Lateefah Simon is a nationally recognized advocate for civil rights and racial justice in Oakland and the Bay Area. She has been the president of Akonadi Foundation since 2016. That same year—driven by Oscar Grant's death—she was elected to the Bay Area Rapid Transit Board of Directors and served as its president. Since 2015, Simon also has served as a member of the Board of Trustees for the California State University, the nation's largest public university system, and state officials often turn to her for strategic advice on policy matters related to racial justice. Simon spearheaded San Francisco's first reentry anti-recidivism youth services division under then-District Attorney Kamala Harris' leadership. Simon received the MacArthur Foundation "Genius" Award in 2003, making her the youngest woman to receive the award —in recognition of her work as executive director of the Young Women's Freedom Center.

This is a free, online-only program; please pre-register to receive a link to the live-stream event.

We welcome donations made during registration to support the production of our online programming.

Director, San Francisco Department on the Status of Women—Moderator 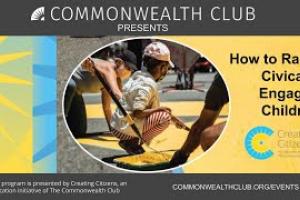 How to Raise Civically Engaged Children