Bloomberg's Brad Stone is one of the country's leading experts on the global commerce company Amazon. His bestselling book from a decade ago, The Everything Store, gave one of the most detailed pictures of Amazon’s unprecedented growth and its billionaire founder, Jeff Bezos. His coverage in Bloomberg Businessweek has helped shaped our understanding of the internet giant.

Since Stone's first book on Amazon was published, the company has expanded to become the most valuable internet company and one of the globe's largest retailers. Its workforce has quintupled in size and its valuation has soared to well over $1 trillion dollars. The company's holdings also include Whole Foods, Prime Video, and Amazon’s cloud computing unit, AWS, which powers many of the country's largest websites. Throughout the pandemic, Amazon became a lifeline for many people and small businesses around the world for home supplies, cleaning products and PPE. Bezos also has a personal ownership of The Washington Post, expanding the Amazon owner's impact.

In Stone's new book, Amazon Unbound, the author presents another deeply reported narrative of how a retail upstart became one of the most powerful and feared entities in the global economy. Stone also looks at the evolution of Bezos himself from a geeky start-up guy to leading one of the globe's most influential companies.

Please join us for this important event to better understand one of the private sector giants that is shaping modern life, and the company's enigmatic leader who is shaping that vision.

Brad Stone previously appeared at the Club as moderator for this event with Steven Levy discussing Facebook.

Members: Click on the "Buy Tickets" button above to order your tickets, and select the members link on the left side of the page. Your username is the email you used to sign up as a member. You can also request a password reset if needed. Discount will automatically be applied at checkout.

Copies of Amazon Unbound are available for purchase during checkout. Purchased books will be sent to the address provided at checkout (domestic U.S. addresses only).

This is an online-only program; please pre-register to receive a link to the live-stream event.

This program is part of our Marin Conversations series, spotlighting the thought-leadership of the North Bay, and is presented with support from Relevant Wealth Advisors.

In Conversation with Sarah Frier

Technology Reporter, Bloomberg; Author, No Filter: The Inside Story of Instagram 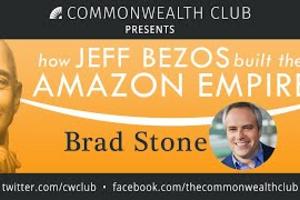