Congresswoman Jackie Speier chose to close out her congressional career at the end of 2022 and did not seek another term. Her departure from Congress brings to an end a Bay Area political career that spans more than 40 years in elected office. She represented California's 14th District in the House of Representatives—which includes San Mateo County and a portion of San Francisco County—from 2008 through 2022. Before serving in Congress, Speier was a California State Assembly member and California state senator; she started her career on the San Mateo County Board of Supervisors.

Speier is returning to The Commonwealth Club to discuss her historic career, one that was launched after her near-death experience in Jonestown, Guyana in 1978 when she and her boss, Congressman Leo Ryan, were shot on the tarmac during the People's Temple mass murder suicide. Congressman Ryan did not survive, while Speier recovered and went on to devote her career to public service. In Congress, Speier was known as a fierce advocate for women's rights, including pressing for laws addressing reproductive rights and sexual harassment and assault, including in the military. She served on the Oversight and Reform as well as Intelligence and Armed Services committees during her time in Congress.

Please join us for a special event with a Bay Area political legend as she discusses her career as well as the changes she sees ahead for the institution she just departed and for the Democratic Party.

Host, "Get Out the Bet" Podcast; Political Analyst and Journalist; Attorney 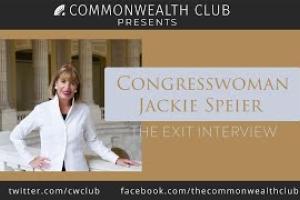