Proposition D and the Future of Housing in San Francisco

This November, San Francisco voters are being asked to vote on a number of ballot measures, local and statewide. One of those local measures is Proposition D, which aims to spur the development of affordable housing in a city that was recognized by the state government as having "the longest timelines in the state for advancing housing projects, . . . among the highest housing and construction costs, and [the state] has received more complaints about San Francisco than any other local jurisdiction."

Join us in-person or online for a timely program to help you decide what choices you want to make when you fill out your ballot. 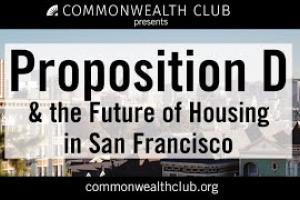 Proposition D and the Future of Housing in San Francisco