In recent years, an influx of racially motivated attacks against people of color in local communities has made national headlines: and the cases of George Floyd, Breanna Taylor and Ahmaud Arbery have sparked international conversations. In today’s age, exposure to racial injustice is more accessible than ever with the rise of video recording and the intimacy of technology. The power to spread information globally, all with the touch of a button, is reshaping the civil rights movement and pushing social justice forward.

Marc Lamont Hill and Todd Brewster are both award-winning journalists and bestselling authors who reveal the common thread between these harrowing incidents. They recognize that technology has irrevocably changed our conversations about race and, in many instances, tipped the levers of power in favor of the historically disadvantaged.

In their newest book, Seen and Unseen: Technology, Social Media, and the Fight for Racial Justice, Hill and Brewster draw on the increasing role of media in the racial justice movement to discover why it took the horrifying footage of the murder of George Floyd—despite a wealth of video evidence of previous police brutality—to trigger outrage. The book is a riveting exploration of how the power of visual media has shifted the narrative on race over the last few years and reignited the fight toward justice.

Join us as co-authors Marc Lamont Hill and Todd Brewster explore the powerful role technology plays as a driver of history, identity, and racial consciousness.

Copies of Seen and Unseen are available for purchase at checkout (U.S. domestic shipping only); our thanks to Marcus Books in Oakland for fulfilling book orders

In Conversation with LaDoris Cordell 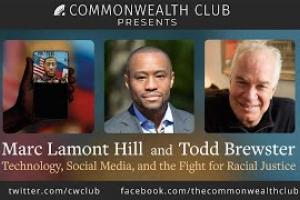