Terry Crews has likely graced your screen at some point; his bodybuilder physique and charismatic humor are hard to miss. Seemingly nothing could stop the Flint, Michigan-born, NFL player turned actor as he landed gig after gig and won accolades along the way.

But under the facade of perfection, Crews was struggling. For all that he sought to control—relationships, his image of toughness, masculinity, his experiences with racism—nothing could hold it all together, leading into a downward, destructive spiral.

Since then, Crews has reckoned with his insecurities and past, garnering a newfound respect for true toughness rather than the exterior austerity he once paraded. His new book, Tough, shares the never-before-told story of his journey through feigned confidence to the new highs of true, conscientious toughness.

At INFORUM, Crews will recount the trials endured while battling cultural norms and societal demands, and further the resounding victories of surmounting these mountains—challenging the system that he says demands men be outwardly tough while leaving them inwardly weak.

This program is part of The Commonwealth Club's Good Lit series, underwritten by the Bernard Osher Foundation.

Media sponsor for this featured program:

In Conversation with Michelle Meow 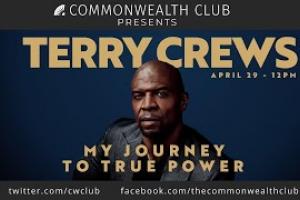